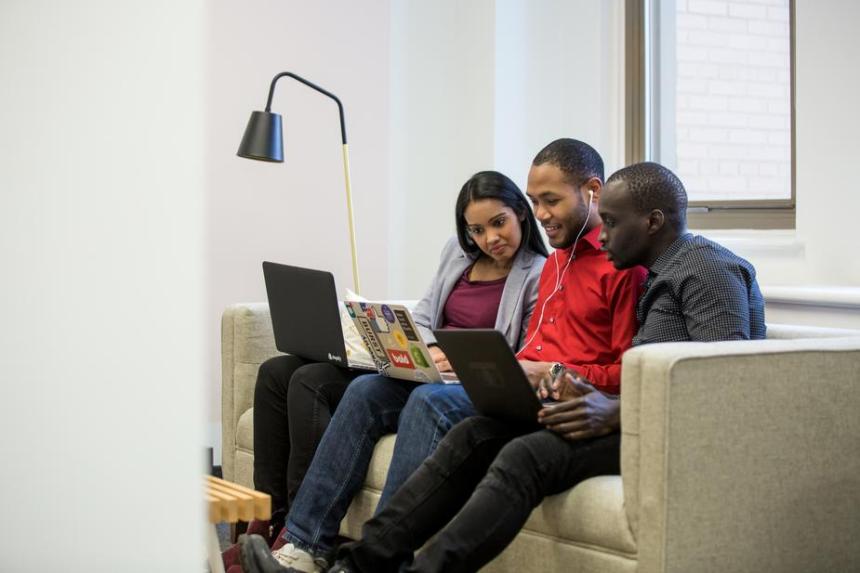 A couple of weeks ago, chat and collaboration platform Slack published its annual report, Diversity at Slack. It tells us that 34.3% of their technical jobs are filled by women, which is significantly higher than the industry average of 20%. The company with eight million users has been around for four years and already has over a thousand employees. To say that their growth is on fire is one way to put it. At Slack, 34.3% of technical jobs are held by women, 48% of managers are women, and 30.6% of executives are women. How did this Silicon Valley company manage to attract so much female talent? Let’s have a look.

Investing in the next generation
There is a labour shortage in technology, which is an impediment to companies’ growth. That makes it necessary to invest in the next generation to ensure that youth – boys and girls alike – consider technology as a possible career. Slack has decided to welcome several interns each year to train them and, at the end of their internship, to offer them a job. This American company is also a financial partner with organizations that promote programming among youth, especially young women, who tend to think that technology isn’t “made for them.”

Offering the same opportunities to all
Three years ago, Slack implemented a transparency program for pay equity and internal promotion. They even created a support group for women within the company. The Women’s Employee Resource Group organizes recruitment and networking events, invites outside lecturers to speak, creates mentorship activities, and offers professional development workshops.

Rethinking Recruitment
Slack’s human resources department looks at a candidate’s skills rather than their university pedigree, since programmers are often self-taught. Their recruiters also use a platform called Textio, which can detect unconscious bias in a job offer. Male managers, for example, might write a job posting that involuntarily targets other men. While it’s not rare for a company to ask programmers to write lines of code on a white board to test their skills, Slack decided to ban this exercise. Not only was this method useless for evaluating a candidate’s abilities, this test also tended to be stressful for people who will be working alone in front of their computer anyway. To attract people with diverse profiles, business have every reason to turn to universities and schools specializing in IT, or to programming bootcamps and groups like Lesbians Who Tech and Queer Tech MTL. Slack also established a partnership with a center that supports transgender people, financing a program whose goal is to improve recruitment of trans candidates.

Finally, at Slack, no one person is in charge of diversity. What happens when you give that responsibility to one individual is that they become the only person to think about it, and that can let other people off the hook. Instead, when a company’s senior management really wants to make diversity a priority, they can create a group with representatives from each of the company’s departments and give them tools to celebrate and advance diversity. They become ambassadors.

I like to think that with this approach, Slack will be able to convince other companies to follow in their footsteps. I’d also like to see some of our local businesses demonstrate such transparency and set themselves real diversity targets. Or maybe they’re scared to test the waters.

Who’s going to be brave enough to dive in first?