Linda Liukas: A programmer, a storyteller and an illustrator

We run faster than ever to come up with most alluring technologies and to become the most successful in our careers.

As an engineer I have been told that I am good at solving problems. I did not think too much though about what problems I can solve, or which directions to take, neither was I encouraged to do so.

Albeit the most consistent direction, was the direction of profit. No money, no project.
Through my professional journey, I have been thrilled with the numerous advantages that technological advances can offer us, as well as being disheartened at being a short-sighted species.

I believe that we are living in a world that is changing rapidly and in a rather chaotic manner. Where the technology is at the forefront of it. So, I started my search to find my way through this chaos. Here is my first try.

Linda Liukas is not your regular programmer. She’s a complex fascinating person who has never taken the easiest way even though she could have. Liukas founded Rails Girls, which has organized workshops in over 300 cities, teaching the basics of programming to more than 10,000 women. Linda worked at Codeacademy, an online interactive platform that offers free coding classes, which she left to write stories that teach children about software and programming. She won the 2013 Ruby Hero prize and was named the Digital Champion of Finland by the EU Commissioner for Digital Agenda. From her own words, her children’s book, Hello Ruby, is the «world’s most whimsical way to learn about technology, computing and coding.»

Bahar Partov: You left codeAcademy to start teaching coding to youngsters. What was the main drive behind it?
Linda Liukas: I was homesick. I lived at the time in New York and missed Helsinki, where I’m originally from. Moving back to Finland gave me the needed space to plan what the next steps for my career should be – and since in a small country the choices were quite limited, I needed to build the next steps myself. Hello Ruby was a side project I had worked on even before joining Codecademy, and I decided that now was the time to fully focus on that. I’m very glad I did, since I haven’t found as deeply meaningful problems anywhere else as I’ve found in the intersection of early childhood education, computer science and creativity. The most scalable change happens in childhood, not in Silicon Valley.  The world changes when we invest in our children.

Bahar Partov: What is your hope for Rails Girls?
Linda Liukas: Rails Girls is a project that is over ten years old by now, so the original goals have probably changed quite a bit. Back in the days I wanted to build a community for people like me, curious about coding and wanting to learn more. Ten years ago the learn to code movement was pretty nascent still, and Rails Girls offered three things: a promise to build something visible during a weekend workshop instead of focusing on theory, a community of likeminded women and an entryway into the local Ruby/Rails ecosystem. Today, Rails Girls has been in over 300 cities, but I’m not involved with organizing anymore. I suppose my hope for Rails Girls is that one day it won’t be needed anymore, that the idea of women not being programmers being completely ludicrous and programming ecosystems having turned friendlier and more accessible for all kinds of learners.

Bahar Partov: You wrote books and hold workshops to teach programming to the adults of tomorrow. What other tools do you think we can use to make programming appealing and accessible to everyone?
Linda Liukas: I want to make a museum exhibition where you crawl inside a computer and learn through play how they work from electricity up, a TV-series with the theme of hopeful Black Mirror for children and a school that blends the thinking of Maria Montessori, Alan Turing and Björk. So yeah, plenty of things that can and should teach computer science and I think time is my biggest limitation right now.

Bahar Partov: How do you see the future of programming? Could it be a future without computers?
Linda Liukas: Absolutely, there could be a future without computers. I think a lot about what technology will look like in 10 or 20 years time, when the kids of today are entering the work life. It’s a tricky timespan, not quite SciFi utopia, but far enough that a lot of generational changes can happen. But already today we see that children will understand computers in a very different way from us, not through screens or keyboards but through voice and sensors and intelligent systems. This generation of kids will be the last to remember computer as the glowing box. They will grow up in a world where computers are everywhere: from their teddy bears to their toothbrushes. That is why it’s important to guide kids to understand how to create, invent and build with a keyboard.

Bahar Partov: Today we live in our digital and physical worlds. Sometimes the divide between the two is significant.  How can we build a future where our virtual world is in more harmony with our physical world?
Linda Liukas: If children’s book author Astrid Lindgren said politics is too important to be left for politicians, I say technology is far too important to be left for technologists. We need a radically more diverse group of people to have a voice in the discussion about what kind of problems we solve with technology. So I think it starts by inviting new voices to the discussion. I’m always on the hunt to find people with inspiring and hopeful visions of future where humans, technology, nature and non-human intelligence live together – my current favorites are Björk, Ted Chiang and all the movies by Hayao Miyazaki, but there are many more we should be listening to. My dream is we won’t live in a virtual world, rather that technology will help us understand better the Anthropocene and each other. Imagine if we could create a language for trees or understand mushrooms. 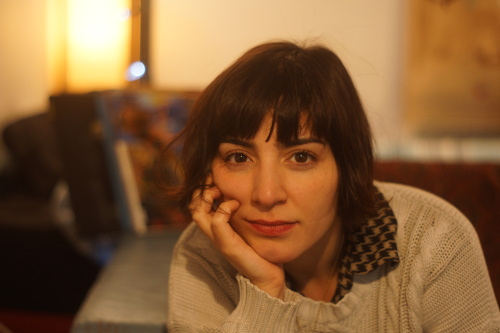 Bahar Partov travelled around the world tolearn about technology and human. She roots forbuilding a future oftechnology that gives its best to humanity. Bahar holds a PhD in mathematics of wireless networks with a mix of experience in communications engineering and research.